Opera is something my Dad listened to on the radio when I was growing up. I didn’t understand what they were singing. It felt remote.

As the lights went down and focused on the stage, I saw SURTITLES™, the COC’s brilliant invention. They’re like subtitles for a foreign film, projected above the stage. Suddenly I understood the words.

There were extra visual clues. These exceptional singers were equally great actors who conveyed plot through movements. Themes were conveyed in set design, choreography … and costumes. Magic. I’ve been going every year since.

Sandra Corazza with a costume from The Magic Flute

A skirt from The Magic Flute

It’s working. The COC posted a $32,000 surplus for the 2015/16 season, a return on investment in artistic excellence — including the wardrobe department.

This past week, I had the treat of visiting Corazza and her team in that very department. We started in a room stacked floor to ceiling with jackets, shirts, trousers and boots, the first of many such rooms. I gasped. 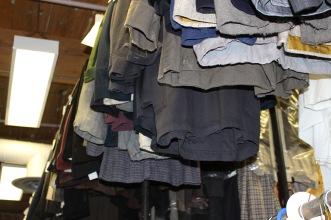 Racks and racks of stock jackets and more in storage

Items are adjusted for individual performers

The department has a big budget, but has to, Corazza says.

“If you’re doing a play, that doesn’t compare to an opera chorus of 40, with a dozen supers [extras], eight soloists,” says Corazza. “You cannot feed that many people with one chicken.”

And they recycle. She describes the investment they made in the wardrobe for The Magic Flute — back this season — as similar to investing in a Little Black Dress or men’s suit to last for years. 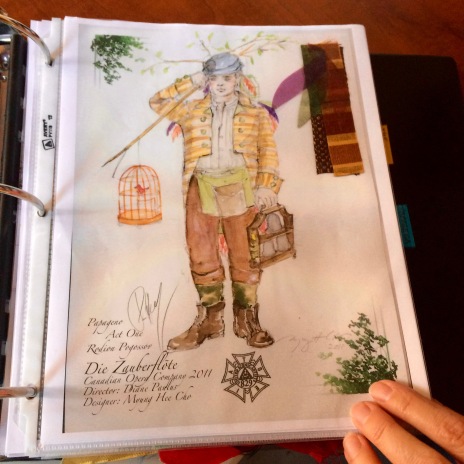 Wardrobe details from The Magic Flute 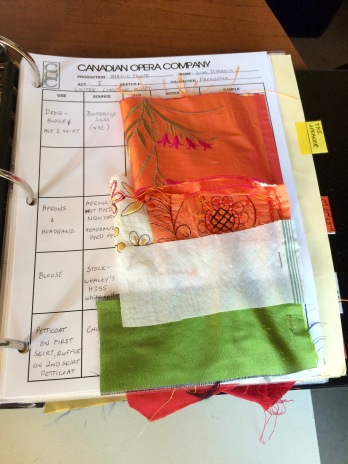 “It’s ours, we built it,” she says with pride. “And because we know we used decent fabric and put seam allowances and side seams in [to every costume], we can put it on again and know it will still be beautiful.”

The COC’s original Magic Flute wardrobe just returned from the U.S. Co-productions are common now, helping distribute cost. Corazza shows me how the U.S. company treated the costumes with respect. She pulls out a skirt worn by the lead female singer. It was hemmed, not cut. Now Corazza’s team can simply take out the hem to lengthen it.

There’s still a tonne of work to do. In addition to The Magic Flute, the COC is staging an all-new production: Riel. They’re building the wardrobe from scratch.

There are challenges. Fitting, for example. One of the male cast members stands 6’8” — not your standard tall guy. Every performer must be measured individually.  Natassia Brunato takes care of the female cast, and Christie del Monte outfits the men.

They work in subtle details that make a huge difference. Louis Riel’s supporters will all be wearing black jackets. Corazza says if the jackets were identical, the men would merge into a single silhouette — not the desired effect. So every jacket features a different texture and hue.

Some Magic Flute costumes have to be recreated. The complex ones will be sewn by tailors across southern Ontario. Corazza shows me a skirt for a character called Papagana.

“The person who made Papagana, the talent on her finger — it’s incredible,” says Corazza with awe.

She says operas have a significant role in keeping the craft of tailoring alive. And by helping to build dreamlike and breathtaking productions, the wardrobe department does its part to keep opera alive.

I’m Laura Boast. I’ve made a career out of creating as a writer, editor and producer. At the core of all my work is a love of artistic expression. I believe we’re all creatives, from the kid doing sidewalk art to the professional musician. This blog is my opportunity to showcase the art I see in and around Toronto. Like what you see? Tweet me!

An inspiring and thoughtful blog about design, living better and the slow movement.

The World according to Dina

Notes on Seeing, Reading & Writing, Living & Loving in The North

If you want to be a hero well just follow me

Turn and print all your digital contents, blogs and social networks into amazing real paper books on blookup.com

Insights from a Canadian bobblehead's perspective

travel and be speechless then write and be a storyteller

love, life, yoga and every nuance in between

beauty is in the eye of the beholder